Do not use the speed control in heavy traffic or on roads that are winding, slippery or unpaved.

The controls for using your speed control are located on the steering wheel for your convenience.

1. Press the ON control and release it. 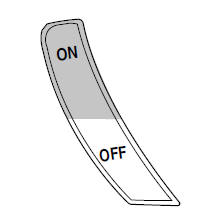 2. Accelerate to the desired speed.

3. Press the SET ACC control and release it. 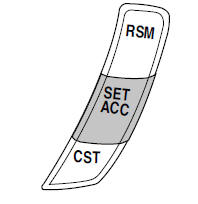 4. Take your foot off the accelerator pedal.

Press the RSM (resume) control and release it. This will automatically return the vehicle to the previously set speed. The RSM control will not work if the vehicle speed is not faster than 48 km/h (30 mph). 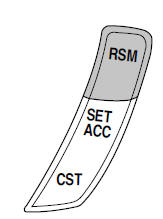 There are two ways to set a higher speed:

There are two ways to reduce a set speed:

There are two ways to turn off the speed control:

The moon roof has a sliding shade that you can open or close when the moon roof is closed.

The use of Mobile Communications Equipment has become increasingly important in the conduct of business and personal affairs. However, drivers must not compromise their own or others' safety when using such equipment. Mobile Communications can enhance personal safety and security when appropriately used, particularly in emergency situations. Safety must be paramount when using mobile communications equipment to avoid negating these benefits.

A driver's first responsibility is the safe operation of the vehicle.

The most important thing you can do to prevent a crash is to avoid distractions and pay attention to the road. Wait until it is safe to operate Mobile Communications Equipment.

Press the remote trunk release control on the instrument panel to open the trunk. 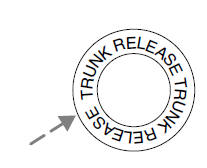 Position the driver floor mat so that the eyelet is over the pointed end of the retention post and rotate forward to lock in. Make sure that the mat does not interfere with the operation of the accelerator or the brake pedal. To remove the floor mat, reverse the installation procedure.

Anti-theft alarm - location, removal and refitting
Note: The alarm system has a self-diagnosis function, which allows a Ford dealer to carry out fault diagnosis, using suitable specialist equipment. In the event of a problem with the alarm system, ...

Air cleaner - removal and refitting
K-Jetronic system Removal 1 Remove the air cleaner element as described in Chapter 1. 2 Detach the fuel filter from the side of the cleaner casing (leave the fuel lines attached to the filter) a ...

Rear suspension leaf spring (P100 models) - removal and refitting
Note: All self-locking nuts and spring washers must be renewed on reassembly. Removal 1 Chock the front wheels, jack up the rear of the vehicle and support on axle stands placed under the side me ...